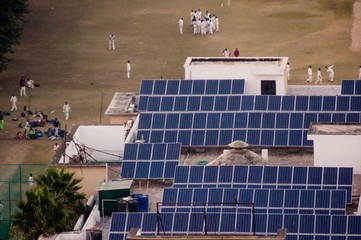 Just over six months after Hurricane Maria wreaked havoc on the already fragile infrastructure of Puerto Rico, microgrids are demonstrating the benefits of a decentralized energy grid. Earlier this month, a piece of construction equipment severed a power line on the island, bringing down a centralized grid servicing 1.5 million people. Amid the festering humanitarian crisis that has now been exacerbated by extreme weather, setbacks such as these become a matter of life and death. Communities fighting the spread of disease and illness depend on grid electricity to keep clinics and hospitals operating, and for the timely transport of life-saving medicinal supplies.

Thanks to the microgrids that have sprung up around the island, crisis was averted for this blackout. Due in part to relief efforts that have included the rollout of solar-plus-storage nanogrids and microgrids around the island, PREPA (Puerto Rico Electric Power Authority) was able to restore power following the outage to over 97% of the grid within a day.

In the wake of Hurricane Maria, energy companies Sonnen Batterie USA and Puerto Rico-based Pura Energia launched a humanitarian relief initiative bringing over a megawatt of solar-plus-storage capacity to communities across the island. On April 17, one day before the most recent grid outage, the partners deployed their eleventh microgrid system in the rural mountain community of Bartolo. The microgrids integrate solar PV with batteries and diesel generators to maintain a backup reserve of 24-30 hours of electric power in the event of a grid outage.

The nature of centralized grid infrastructure leaves it susceptible to widespread outages caused by localized events, which can be as trivial as the activities of squirrels. Microgrids provide communities with contingency plans to keep power flowing when disaster strikes. And as another hurricane season rapidly approaches, such planning will be essential to the work of keeping Puerto Rican infrastructure functioning, minimizing the public health risk of severe storms and central grid failures. Connected to microgrids, communities are much better prepared to make it through a superstorm with their power sources in tact and fully functional. Moreover, in places like Puerto Rico where infrastructure is often already badly in need of maintenance before a storm hits, it will be crucial to rebuild more efficient systems, to not make the same decisions that created such a vulnerable grid in the first place.